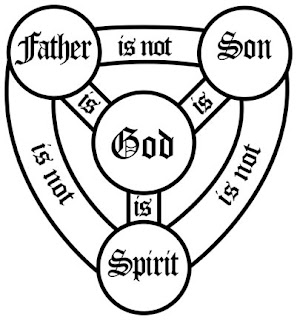 Erickson believes that if authority and submission are essential and not accidental attributes of
the Father and Son, then this “is equivalent to saying that they are not homoousious with one another.” Erickson finds an internal contradiction in such an articulation of the Trinity.

In spite of protests to the contrary, in the complementarian view of trinitarian relations there is a drift towards something that is akin to ontological inferiority in the Son, surely and doesn't this separate the persons of the trinity too much? Ontological equality and permanent functional subordination is incoherent and in its use as a measure for the relations between the genders, it is clumsy.

We have to either deny eternal functional subordination or we have to deny ontological equality...a combination of the two is just not an option open to us....is it?

Complementarian trinitarian formulations owe more to Aristotelian logic and the Great chain of Being. St Paul challenges immutable distinctions grounded in Greek thought with his counter-cultural teaching regarding people's equality in Christ. The Dalit community is powerfully grasping the gospel for this very reason and Feminist, Dalit theology makes for a particularly fascinating read at the moment.

Defining the Trinity as an eternal hierarchy of authority and submission neccesitates reading the Great Chain of Being back into the biblical text. That the Bible teaches ontological equality has envisioned some of the great liberation movements of our time: democracy over Kingship, civil rights over slavery, women's suffrage over their political and social subordination – these are godly movements, as I am sure you would agree.

It would seem that Ware and Grudem are at one pole in this debate and Kevin Giles at another...I am awaiting a paper by Michael Bird that might be more nuanced. Whilst we must not polarise each other, I suggest that ultimately Complementarian Evangelicals and Egalitarian evangelicals (the labels don't really help...it's more nuanced, but we have to begin somewhere) are going to differ on our understanding of the trinitarian relationship. I hold that my position is not so much a capitulation to contemporary culture as the hierarchalist position which seems to draw much of its breath from pagan, Greek, Aristotelian thought-systems such as the Great Chain of Being. It is argued that the hierarchalist position is not Arianism – Giles believes it is, he goes too far, it is however a very difficult concept to argue from Scripture and reminds me very much of the faith of our childhoods – God the boss and Jesus second and then the Holy Spirit about whom I was taught little as a child. I have very much enjoyed studying the Trinitarian relationship and the perichoretic beauty and how much this has to teach us about 'community' and the way that we should relate to one another – it is the drive behind much of our modern day liberation theology and our attempts to grasp it and live it out is doing much to further God's Kingdom here on earth, particularly amongst those who have often been forced into subordination through human sin.

I've always been uneasy about complementarian arguments based in Trinitarian relationships. Surely the model of subordination is Christ and the Church (Eph 5)?

Hi Rachel. As I said in the AEJCC Facebook group, this is a must-read, not least for the critique of Kevin Giles. Peter Adam is a most gentle, generous and eirenic man, as well as an excellent scholar and evangelist:

Eph 5 yes and that mutual submission to one another as the aim, which is what Paul describes and then expands upon.

Hi John, I read Adams but his is a critique of Giles. Giles' theology is clumsy but there is not much content to a point of view from Adams, only displeasure with his senior Bishop and Kevin Giles...I am sure he is eirenic but this paper left me a bit unsatisfied.

I must confess that I find Christology easier to get my head around than the Trinity. I am unpersuaded that we can map intra-trinitarian relations onto male-female relations, and lets speak of relationship rather than role...does the Bible actually assign different 'roles' to men and women? I think Giles misreads Athanasius, Kenton Sparks discussess this helpfully in his God's Word in Human Words.

It may be worth highlighting that in Reformed theology it has been accepted that we cannot know God in himself. This may serves as a helpful restrain on the idea that the economic trinity is a reflection of the ontological.

Thanks for this, it's good to see your thinking on the issue. I'm sorry I'm picking this up a little late, but deadlines are somewhat immutable!

This is likely to be quite a longish response (sufficiently long that blogspot won't let me post it as a single response), and I'm going to pick up on some of the things in the post that prompted my original question, if that's OK.

A couple of things up front:

An ordered relationship in the Trinity

(Much of this section is a short rerun of my original response http://bit.ly/TGBxKI)

My response on the original post wondered (amongst other things) how 1 Corinthians 15 could indicate anything other than an ordered relationship (I have subsequently discovered that others have asked the same question http://bit.ly/TLguJn). Similarly, the language of the Son being sent (1 John 4:14) and the Spirit being sent (John 15:26), suggest some kind of ordering.

Hilary of Poiters points to the self-revelation of Father, Son and Spirit to enable us to apprehend them accurately (Hilary of Poitiers, On the Trinity, 1:21). Calvin, also, refers to a "reasoned order ... which yet takes nothing away from the deity of the Son and Spirit" (Institutes 1.13.20). Under "Refutation of anti-Trinitarian heresies", Calvin has a section entitled "The subordination of the incarnate Word to the Father is no counterevidence" (Institutes 1.13.26).

Christ only submissive on earth

The section I wanted to look at in more detail on the original post was about the Son only being submissive on earth, but not in heaven; that the ordered relationship was not present in heaven. You drew this from the Father and Son sharing the throne in Revelation, but without a reference, it's hard to engage with. If it is the case that the Son is only submissive on earth, I can only see two ways in which that happens: the Son is different as regards his divine nature while on earth, or the Son pretends to be different regarding his divine nature on earth.

Alternatively, if the Son simply pretends to be submissive in the incarnation, then that raises some big questions about the truth of his submission statements: if the Son is not actually submissive to the Father, he can't pray 'not my will, but yours' with any truth because it is the Son's will as well.

The second area that concerns me is the proposition that the three persons of the Trinity are ontologically and functionally identical, and that there exists no order in their relationship.

I want to be clear that I believe Father, Son and Spirit to be of the same substance, but it does seem clear that they exist in an ordered relationship (see above). If they do not, there are a number of unfortunate consequences.

If we are to say that they are functionally equal, I no longer see how we can differentiate between them. If they are indistinguishable, then how do we know which is which? How can John write about Christians having "an advocate with the Father, Jesus Christ" (1 John 2:1), if Father and son are functionally identical? As far as I can see, this indistinguishability leads us away from the Trinity towards either polytheism, or modalism.

If there are three ontologically and functionally identical divine beings, how can we tell that they are not three separate gods? To be indistinguishably identical gives three 'Fathers' or three 'Sons' or three 'Spirits'.

Taking everything into consideration it would seem from all the verses a true exegetical complementarian view might look like this: Total Authority with no inherent submission of any kind = Y [the Father being the one and only true eternal Theos]; Total Submission with no inherent authority of any kind = X [the Holy Spirit being the one and only true eternal submissive]; Total Authority & Total Submission held in Total Concert = X-Y [the Son of Theos eternally begotten holding in one person all the titles of Isa 9.6 with inherent authority and inherent submission fully balanced as the one and only Prince of Peace]. The essence is Word for all three separate and distinct personages in an eternal relatedness with the Son and Holy Spirit ontologically subordinate to the one and only true Theos [the one and only non-submissive]. I like it and it works for me, may it catch on and start to work for others for it seems to solve most problems for all other views. LESJR