Just in time...all will be well with Welby 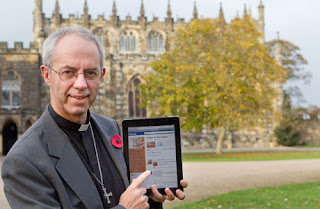 Picture from Bishop to hold meeting at Angel of the North by Neil McKay, The Journal Read More

I, for one, am excited at the prospect of the appointment of Justin Welby.

I need to read around but know that he believes in the ordination and consecration of women. Giles Fraser got this out of him, which is perhaps a little obtuse:

More concrete is the fact that in a diocesan pastoral letter he describes how he is "committed to and believes in the ordination of women as bishops".

He understands desires to retain a traditional definition on marriage.

He is from an evangelical, charismatic background, having worshipped at HTB - he will be sound and strong on biblical approaches to life and faith. John Bingham, the religious affairs correspondent for the Telegraph explains how:

"Theologically, he is unashamedly part of the evangelical strand of the Church, upholding a more traditional and conservative interpretation of the Bible than some."

He is very good news for the church.

He has real life experience from the world of business and a sound academic background.

He is even pretty new into ministry -being called in the eighties and he is an advocate of modern forms of worship.

He also has all that experience of a reconciliation ministry (from his days in Nigeria, particularly) that he is going to need in order to hold us all together. He has been the co-ordinator for international ministry at the International Centre for Reconciliation.

What more could we ask! :-D

Here is a godly man, in touch and engaged with the world as he finds it.

Here's what he said about one of his latest prayer initiatives in the North East:


“I am inviting people across the diocese to say what they long for in our communities and the people who live in them.
“A key part of the campaign is the use of social networking to allow people to submit their prayers.
“When things are tough, sensible people turn to God. We often make prayer sound really difficult, but at its heart, prayer is sometimes telling God our hopes and dreams, and then letting him shape us and our future.
“I hope many people will take this chance to stop for perhaps just a few minutes, say to God what’s on their mind about their own future and the future of all of us here, and then share that prayer. People can use Twitter or Facebook or turn up at one of the places I’ll be...
“We see social networking as important because it’s a whole new way of attracting people to the word of God.”
He will be popular particularly with us more evangelical, charismatic, Anglican bloggers. Great stuff!

Must have missed the official announcement about this, unless that's now been outsourced to Ladbrokes ;-)

Ah - ha - only 'the prospect of the appointment' - I have thought carefully about my words. But I am taking a godly bet on it. :-D

New ABC designate not expected to be named by 10 Downing Street office until 11.00 am tomorrow Friday 9 November. Until then all is rumour and speculation, even if Justin Welby seems a good bet. Much prayers needed for person appointed.

The point about his evamgelicalism might need to be nuanced a little Rach - he also draws on the Benedictine and Chemin Neuf Community traditions... His breadth will be a blessing, and may be a challenge to evangelicals. Nonetheless, like you, I'm really chuffed!

Ah yes, Michael - that beautiful combination of evangelical biblical passion with a the joy of sacramentalism thrown in - we saw this beautifully modelled at St John's I think, through particular lecturers I have in mind. This is a good thing about Welby. I suspect his giftings in diplomacy and negotiation are also spiritual endowments - he can appreciate the worship of God from a spectrum of positions.